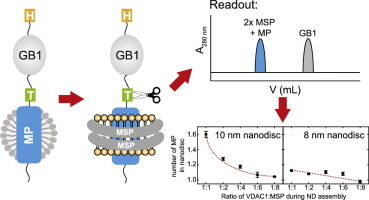 Recent studies on G protein-coupled receptors revealed that they can dimerize. However, the role of each subunit in the activation process remains unclear. The receptor for γ-amino-n-butyric acid type B (GABAB) is composed of two subunits: GB1 and GB2. Both consist of an extracellular domain (ECD) and a heptahelical domain composed of seven transmembrane α-helices, loops, and the C-terminus (HD). While GB1 ECD plays a critical role in ligand binding, GB2 is required not only for targeting the GB1 subunit to the cell surface, but also for receptor activation. Here, by analyzing chimeric GB subunits, we show that only GB2 HD contains the necessary determinants for G-protein signalling.

However, GB1 HD improves docking efficiency. In contrast, although the ECD of GB1 is sufficient to bind GABAB ligands, the ECD of GB2 increases the affinity of the agonist at N-terminal 6xHis-GB1-tagged Recombinant and is required for receptor activation by the agonist. These data indicate that multiple allosteric interactions between the two subunits are required for wild-type functioning of the GABAB receptor and further highlight the importance of the dimerization process in GPCR activation.

The N-terminal c-Myc and HA-tagged GB1a and GB2 coding sequences described previously (Pagano et al., 2001) have been subcloned into the expression vector pRK5. To construct the GB1/2 and GB2/1 chimeric receptors, a unique Bsu36I restriction site was introduced into the region encoding the tripeptide Pro434–Pro435–Ala436 and Pro405–Pro406–Lys407 located at the C-terminus of the extracellular sequence. of the c-Myc- or HA-GB1a and GB2 subunits, respectively. The fragment between the EcoRI site preceding the start codon and the introduced Bsu36I site was exchanged between the two plasmids, thus creating the plasmids expressing GB1/2 and GB2/1 chimaeras. Construction of the HA-mGlu5 receptor expression vector has been previously described (Ango et al., 1999). 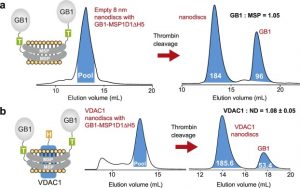 The incubation was terminated by washing three times with ice-cold binding buffer. Cells were then disrupted with 400 ml 0.1 M NaOH and bound radioactivity was counted. The amount of protein in each well was measured by the Bradford method. Nonspecific binding was determined in the presence of 1 mM GABA. The concentration of [125I]CGP64213 used in the displacement experiments (0.1 nM) was approximately 10-fold lower than the affinity of this radioligand on GB1.

Ki values ​​were calculated according to the equation IC50 = Ki (1 + [L]/Kd); Kd was assumed to be equal to Ki in the case of CGP64213. GABA was obtained from Sigma (L’Isle d’Abeau, France). [125I]CGP64213 was synthesized as described elsewhere (Kaufmann et al., 1997a) and labelled with a specific radioactivity of >2000 Ci/mmol (ANAWA AG, Wangen, Switzerland). L-baclofen was synthesized in the research laboratories of Novartis Pharma in Basel (Froestl et al., 1995). Displacement curves were fitted as previously described (Galvez et al., 2000a).

The pellet was resuspended in Tris-Krebs buffer. Membranes (50 µg protein) were incubated in the dark for 1 hour at room temperature with 0.8 nM [125I]CGP71872. Nonspecific binding was determined in the presence of 1 mM CGP54626A. Binding was stopped by two washes with cold Tris-Krebs buffer prior to UV cross-linking. For immunoprecipitation, labelled membranes (200 mg) were resuspended in 100 mL of buffer [50 mM HEPES pH 7.5, 150 mM NaCl, 1% (w/v) deoxycholate, and protease inhibitors] at 4 °C. and then centrifuged at 100,000 g for 1 hour.